Branding is essential for medical practices in the same way it is for any other business. Adding personality to your healthcare brand with a carefully chosen logo and compelling color scheme is all it takes to bring flair to your brand and make it stand out.

If you’re about to start your medical practice, it should have a logo that plants a sense of trust and care in the minds of your patients. So, what kind of logo will you choose that helps you cut through the noise and stands out from the competition?

A lot of healthcare providers in the US tend to choose the image of two snakes wrapped around a staff, known as the caduceus, as their brand logo. This is both right and wrong.

To help you understand why some practitioners use caduceus as medical symbol, let’s go back to the origin and meaning of caduceus.

The word caduceus (pronounced as ka-DOO-shus) is derived from the Greek word kērukeion, which means “herald’s staff.” In the ancient times, heralds (who claimed to be the descendants of the Greek god Hermes) were messengers who brought and announced the news.

That caduceus symbol belonged to Hermes, the ancient Greek god. The Romans called him Mercury. The symbol originated when Hermes attempted to stop a fight between two snakes by throwing a stick at them. The snakes twined themselves around the rod and became fixed, and that’s how the symbol was born. The caduceus symbol is also sometimes called as Hermes caduceus.

Though the caduceus symbol and medicine are widely associated, the association is incorrect. Here’s why.

Historically, Hermes and the caduceus didn’t have much to do with health or medicine. So why did the caduceus become the emblem of the medical profession? Most likely, it is a case of mistaken identity with a more fitting symbol, the Rod of Asclepius.

Since Hermes was considered the messenger for the gods, it inspired printers to use this symbol to represent the printing industry. Later, in 1902, a US Army officer mistook the caduceus symbol printed on one of the medical texts as a reference to medical practice and proposed the medical symbol of snake to represent the Army Medical Corps. Though it was a mistake, the widespread use of the caduceus symbol in the US military medicine gave birth to the present-day misinterpretation of medical caduceus.

Who Uses the Caduceus Symbol?

There are two versions of the serpents-with-a-staff emblem. One is the Rod of Asclepius, which has a single serpent around the rod, wielded by the Greek god Asclepius, who’s associated with medicine and healing. The other version is the caduceus symbol. It seems this confusion of symbols is uniquely American. 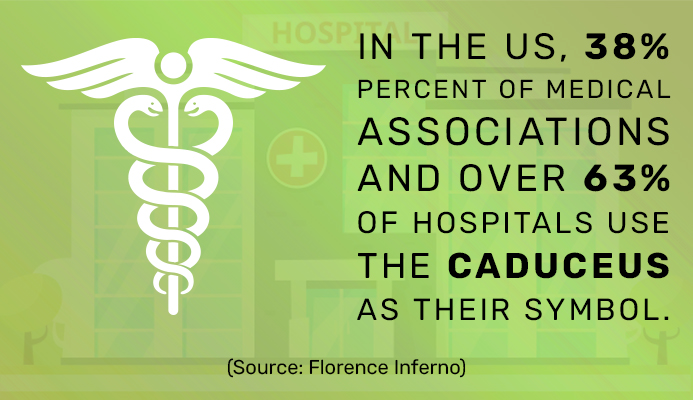 A lot of people ask us about the significance of snakes as a medical symbol. One explanation could be that the Greeks considered snakes sacred and used them in healing as their way of honoring their god Asclepius. For them, snake venom was remedial, and they viewed snakes’ skin-shedding as a symbol of renewal and rebirth.

Medicine is full of symbols, which tend to change their meaning, just like languages. Symbols like the Rod of Asclepius and the caduceus tell us about an era of professionalism long before there were accreditations. But as a healthcare provider who’s looking for medical practice branding guidelines, it’s the staff with one snake that you should be considering.

That’s all we have to tell you about the caduceus meaning in medical terms. We hope it gets you thinking about branding your medical practice in an entirely new way or just strengthening the brand your patients already love. Keep coming back as we will be adding more medical practice branding ideas to our Practice Builders blog. Do share your thoughts on healthcare branding! Maybe we’ll add your ideas to the list.